The woman ran over the grass of the wide field towards the huge house. She didn’t bother to wait until the housemaid opened up, but climbed over the gate and ran to the door. Before she could knock it was opened, the strict face of the maid looking at her.

“Miss Elena, how often did I tell you to wait until I open up. A woman doesn’t just climb…”

“Sorry, Maggie… is my sister here?”

“Which one?” the woman asked.

“She’s in the living room… at least she was when I looked five minutes ago!”

“I thought she went to London yesterday!”

“No, she didn’t. Something went wrong on the operation two days ago. She could be recognized if near the queen. Katya went to London instead of her.”

“Miss Elena!” Maggie cried out, almost breaking down. She had raised the three women. While she had managed to make Katya and Irina true ladies – at least sort of – she had failed gloriously in Elena’s case. “For the hundredth time: Women don’t curse!”

“What’s going on?” Irina looked out of the large living room, a book in her hand.

“Oh, Irina, why haven’t you gone to London?”

“Because Katya went! Nice to see you too, by the way. Where have you been? Crawling in the bushes?” Irina looked in disbelief at the totally ruined dress of her younger sister. It really looked as if she had just been swimming in a puddle of dirt.

“Stop being sarcastic! There’s someone down in the village, asking for you.” Elena explained, trying to catch her breath. “The baker’s wife told him that a woman called Irina lived up here. When I spoke to the librarian, he told me this man is a high ranking counselor at court. And he’s on his way…”

“Damn it!” Irina hissed and Maggie had to hold on to the wall when she heard the second woman start to curse.

“What the hell did you do to catch the attention of the head of the queen’s army?” Elena asked her, panicked.

“Nothing… well… I showed my face to one of the soldiers. I couldn’t know that it was a set up!”

“And did you write your name on your forehead or what?” Elena snapped. “How the hell does he know your name?”

“I told him!” Irina admitted and now it was Elena almost breaking down.

“She told him!” she said to Maggie and turned to Irina again. “Are you out of your mind? Why not handing him a list with everybody involved, shackling yourself, and turning yourself in to prison? Wouldn’t make much of a difference, would it?” Elena asked Maggie with a huge amount of sarcasm in her voice. The old maid shook her head strictly to cut her off.

“However, your sarcasm is not very helpful here,” Maggie said sharply. “Instead of discussing what you can’t change anyway you should rather hide, Irina!”

“That’s ridiculous. I’m not hiding! You just don’t let him in, Maggie.” Irina decided, her voice certain and without fear.

“Well, problem number two. He has a letter that allows him to search every house… so he doesn’t need our permission to get in. That’s the problem when the security of the queen is endangered!” Elena reported and Irina turned around.

“In that case, I’ll really leave the house and go somewhere else…”

“Where?” Elena and Maggie asked at the same time.

“Somewhere. No need to tell you. The less you know the less information you can give away. Elena, hang your white blanket out of the window when he’s gone!” Irina said, and rushed away. Elena and Maggie looked at each other, then Maggie set herself into motion.

“Okay, Miss Elena, you look like you’ve just run here from the village – which you did, so I suggest we make you look like a lady. Here’s the plan. You pretend to be Irina. Come on… you’ve got to change!”

About twenty minutes later Elena was looking like the perfect lady. Maggie had done her best to turn her boyish outside into a female one, and she was content with her work.

Only five minutes later they heard noise at the gate. Maggie left the house.

“May I help you?” she asked the visitor outside the large metal gate and the man looked at her through the bars.

“I was told in the village that a woman named Irina lives here. I need to talk to her.”

“I’m afraid, Lady Irina is unavailable at the moment.” Maggie replied courteously and the man frowned his forehead, then pulled out the official letter which allowed him to enter the house. “Oh… I’m sorry, Sir, I didn’t know you were sent by the queen.” She opened the door and let him in.

Elena was sitting in the living room, reading. When Maggie knocked, she sat up straight and played the lady of the house.

“Milady, there’s a man who wants to talk to you.” She winked at Elena and the woman got up.

“Maggie, didn’t I tell you to send all visitors away today?”

Maggie had almost started to laugh at the arrogant tone in Elena’s voice which was usual at court. She had to admit that, even if Elena was not at all a lady to show around, she was certainly an excellent actress. “I’m sorry, Miss, but he’s been sent by the queen.”

Maggie opened the door and let the man enter the room. He looked around and when he caught glimpse of the woman in the armchair, he raised his eyebrows.

“This is not Irina!”

“Excuse me?” Elena got up and Maggie didn’t believe her eyes when she behaved like a true lady in her reaction. “Have you come to my house to offend me, Sir? Isn’t it habit at court to introduce yourself when entering a house? I can’t remember you having done so!” She sounded really offended and Maggie had a hard time trying to hide her grin, since she knew that usually Elena didn’t care a penny for habits and manners.

“I apologize. My name is Jack Donahue Bristow, Lord of Kent, I’m here to talk to Irina – which is not you!” His voice was level, but the way he said the words allowed no contradiction.

“Maggie, would you tell this gentleman who I am?”

“The baker told me, Lady Irina’s hair was long and brown. This lady’s hair is short and brown.”

“Um… I had it cut yesterday!” Elena explained.

“Interesting… especially since it was still long when you were in the bakery this morning!” Jack stated courteously and Elena looked at Maggie, silently pleading for help.

“Miss Irina suffers from an illness, Sir. She’s unable to measure time… she’s a little crazy.” She pronounced the last word lower as if Elena mustn’t hear it, and Jack looked at her, quite amused by the comedy those two women were playing here obviously.

“I cut her hair two hours ago.” Maggie hurried to add and smiled friendly.

“As much as I enjoy this little play, I’d rather talk to Irina herself now.” He finally said. “And I suppose you’re Elena – her sister with short brown hair.”

“What are you, a goddamned spy?” Elena snapped insulted and let herself fall to her chair, all manners suddenly gone. She hated to lose. “You’re right, I’m Elena. Irina is currently unavailable.”

“She’s in London.” Elena lied and again Maggie was surprised how convincing her words sounded. This time not even Jack Bristow seemed to have doubts.

“In London?” he asked and shook his head in disbelief.

“Yes. I assume that you’re the person who almost caught her two nights ago. She thought that you would be busy with searching for her here, because after you have seen her you would think that she would never be foolish enough to go to London. So that’s where she went.”

“Point for her!” he murmured and looked from one woman to the other. “Would you excuse me? I have to… go to London!”

“Bristow!” Elena snapped and Maggie gasped for air at this absolutely insulting address, expecting to watch her lady be arrested at once.

“Miss Elena?” Jack replied controlled and turned around once more to look at the woman.

“What do you want from Irina?”

“I want to talk to her… that’s all!” he replied and Maggie looked at him surprised, then her eyes rested on him thoughtfully.

“Oh, I believe you!” Elena said sarcastically. “Talk to her in the torturing room of the Tower, right?”

“No. Just talk to her!” he answered and turned around.

“Irina told me that it was a soldier she gave her identity to, not a Lord or higher ranking officer. I think you’re lying to us about being the one who met her.”

“I was in disguise – she probably thinks I’m just a common soldier. We could resolve those doubts if she was here to talk to me. Since that’s not the case, any kind of discussion is useless. Have a nice day.”

With these words he left. Maggie was so confused that she didn’t even accompany him out the door. The two women looked at each other, then they rushed to the window and observed him leave.

“I don’t know…” Maggie finally said as he was gone. “It seemed as if he really just wanted to talk to her.”

Stargate Aschen: Chapter 37 – The Ghost In The Mill 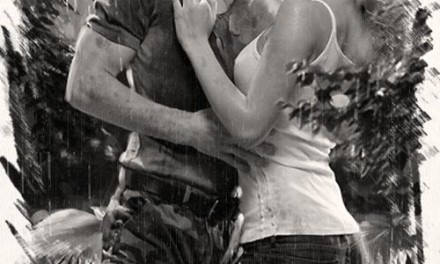